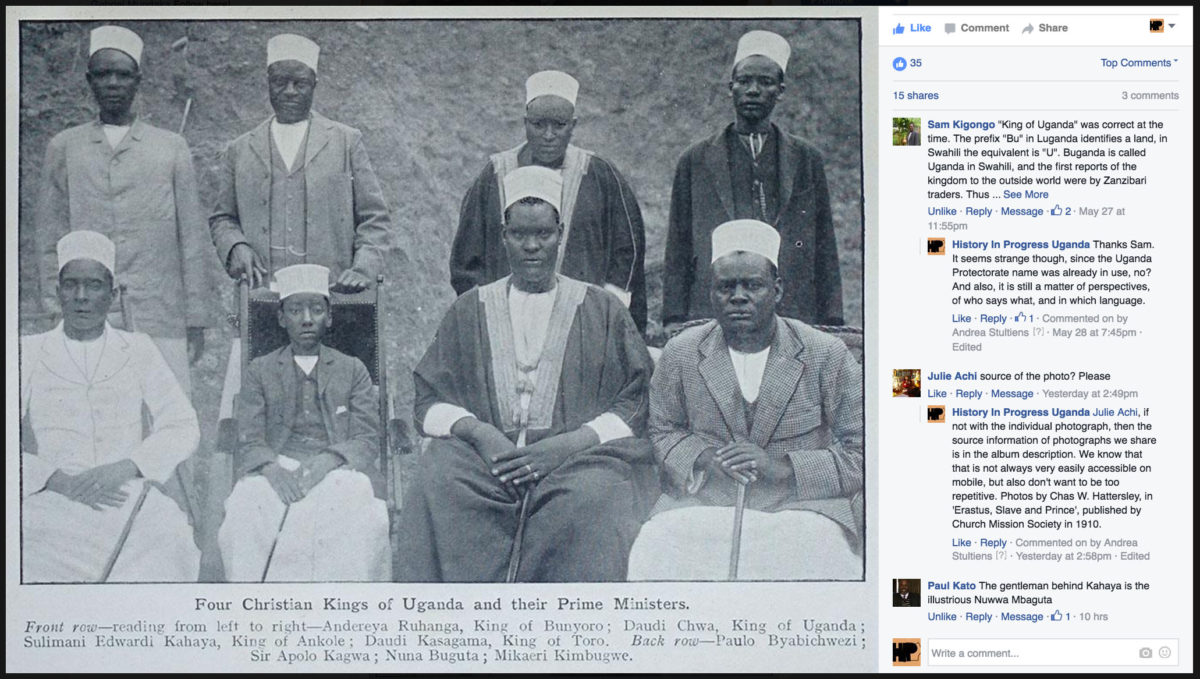 The most popular image posted by us on Facebook last week shows eight men. Four of them ‘Kings’, the other four their ‘Prime Ministers’.

It is not surprising that this image, part in this case of a missionary propaganda booklet, attracts attention. The Kings are individuals that many of you, our followers, show you wish to connect with somehow, through liking or sharing their pictures.

While preparing this blog post serendipity got to work. Long time HIPUganda contributor Kaweesa Kaweesa tried to share an image with us on our Facebook page. He was, as he told me later, using his phone. This resulted in only his caption coming through:

2. Kabaka Daudi CHWA II of Buganda Kingdom. He ascended the throne in 1897 aged 13 months after his father Mwanga II Basammula-Ekkere had been deposed and later arrested with CHWA II KABALEGA. He is the grand father of the reigning Kabaka Ronald Edward Frederick KIMERA Muwenda MUTEBI II.

3. Omugabe Edward Suleiman KAHAYA II of Nkore Kingdom. He ascended the throne in 1895 when he was aged eighteen years. 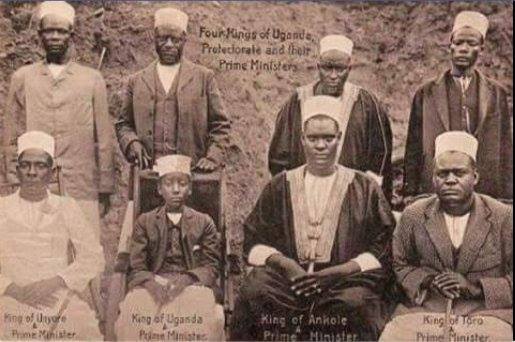 Kaweesa’s caption, that specifies and does justice to ‘the King’s’ titles but does not proceed to their ‘Prima ministers’, is much longer than the one we included last week with our post:

This one is in line with the HIPUganda policy, formulated years ago that says to include ‘only’ the way the image was framed in the original source, because we would like to give viewers of the photographs the opportunity to respons as openly as possible to what the photo shows. The original caption is in this case making a point of the King’s religious transformation, that was, for the Church Mission Society, publisher of the booklet a sign of their success. So much for giving the opportunity to make up your own mind. The caption is also questionable with regards to, for instance, Daudi Chwa’s title of ‘the King of Buganda’, the spelling of the name of the ‘prime minister’ of Ankole (aka, or should be names as, Nkore?). Both points are commented on with the post.

While sharing and keeping an eye on what happens with the photographs we are learning about the qualities as well as the limitations of both our policy and captioning photographs in general. Both topics that will surely reappear here in the future.

The file Kaweesa shared, after his trouble to upload it, is a low res digital version of a picture postcard. His caption brings about some of the conflicts the various generations of Kings were, sometimes more sometimes less famously, involved in. Caught as they were between loyalty to their people and demands by colonial powers. 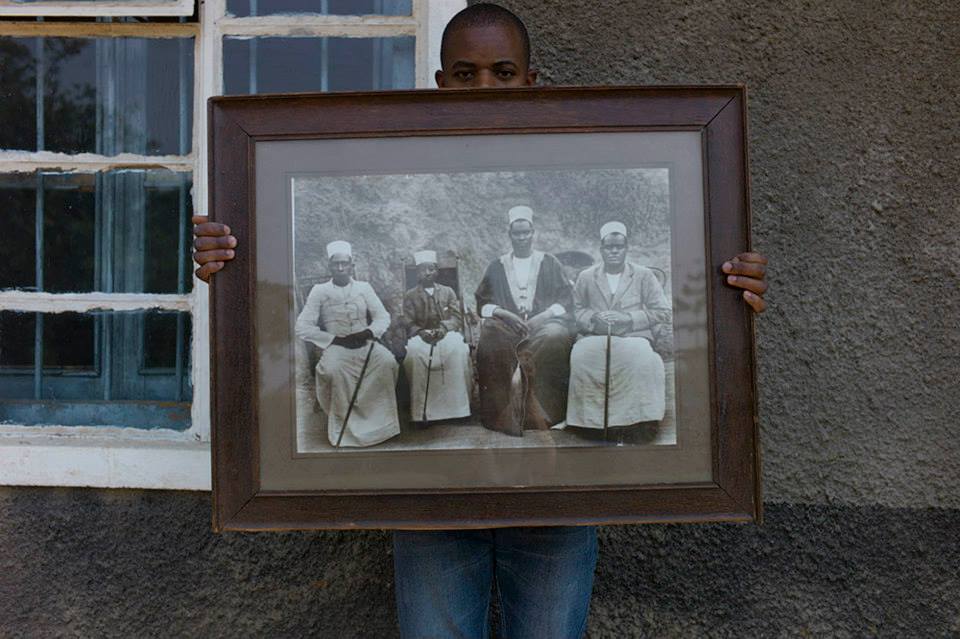 The booklet with the photo this blog post is based upon describes the occasion of the meeting between the four Kings: ‘Very recently a large exhibition was arranged at Mengo, or Kampala as the Government hill is called, and three kings from Bunyoro, Toro and Ankole, and several over-lords were invited (ordered, if you like) to come in with a number of their people, and to exhibit articles typical of the manufactures of their countries. Now you must realize that this is the first time in the history of Uganda that these kings have ever met except for war, and with our King Daudi they made four. We had great times. Special state sevices at which all the kings were present, Government receptions, tea parties, and, one event to us of especial interest, a dinner for three of the kings and a concert well rendered by the boarder in the High School for their entertainment after the dinner.’ 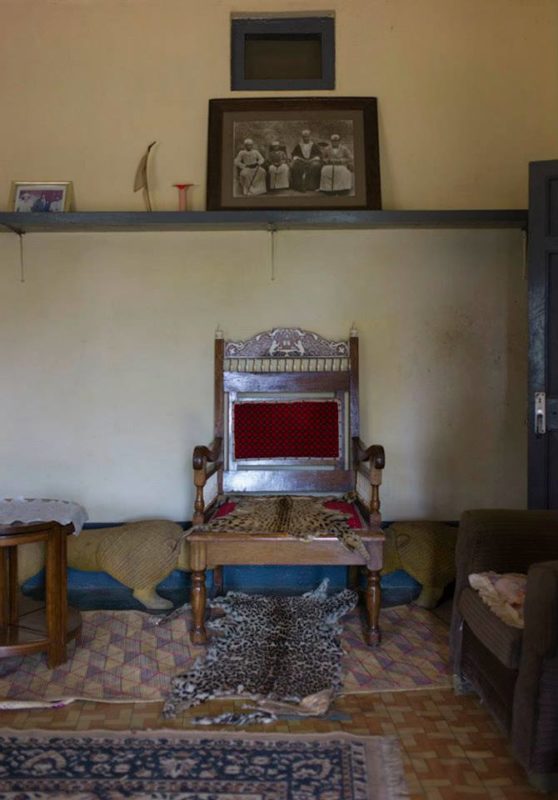 We find isolated versions of full posture royal portraits, a generation down from the above photo, as part of the booklet that accompanied ’The Royal Visit’ to Uganda by the Queen mother . This visit took place in 1959, four years after Mutesa II’s first exile by colonial government, seven years before the second during Obote’s rule.

Mutesa is in the program on the 19th of February, next to where his portrait is placed. The other royals met Elizabeth three days later on the 22nd, together with ‘the secretary general of Kigezi’, who is not there in photographs.

The Kings have become ornaments in this booklet, and illustrate nicely what context can do, when comparing their photographic presence to the Queen Mother’s. Maybe they could even be seen as a forebode to the way in which people are presented in printed news media on what seems to be a global scale. There are words and pictures, still, but the words and the readers imagination, triggered by them, are in control because the context of the photographic likeness is missing. 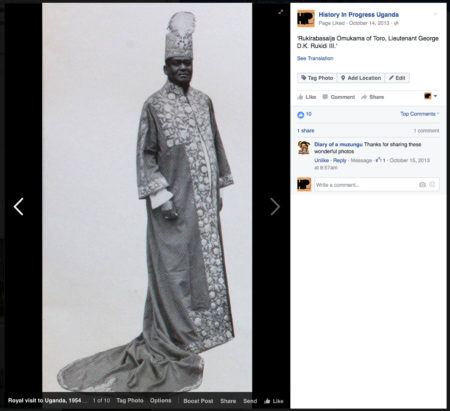 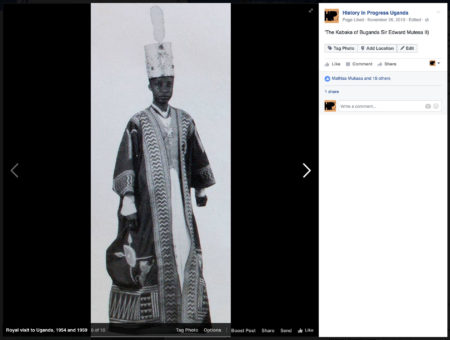 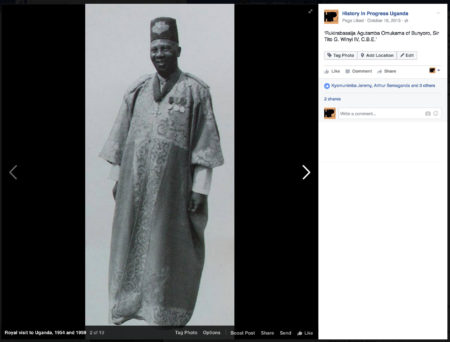 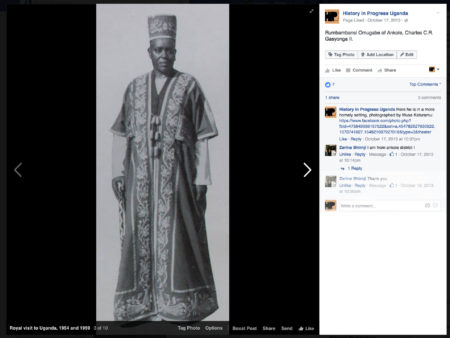 The photos with this blog post can be found in various albums. If you are interested in seeing more try:

Ankole Kingdom (photo that is held, and placed in the palace seems to have been made on the same occasion as the above one, but without the ‘Prime Ministers’. Meaning we now know who made it, C.W. Hattersley, author also of, a.o. The Baganda at home. Find some reflections on him, his images and Ham Mukasa in this article.

And (see below) the National Archives display (on website) or Facebook, and another meeting of the Kings, a few years later, in another setting, with the whole Lukiko. From, Again, the Ham Mukasa foundation collection. 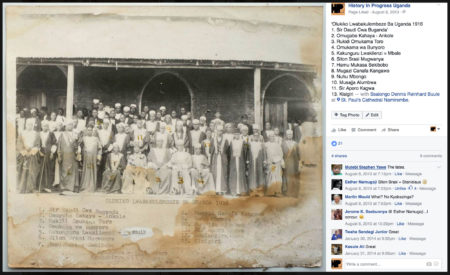 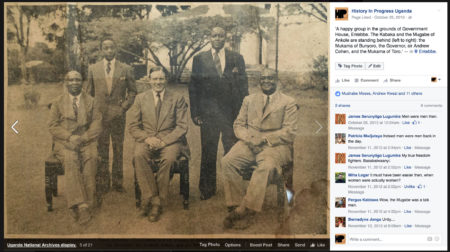 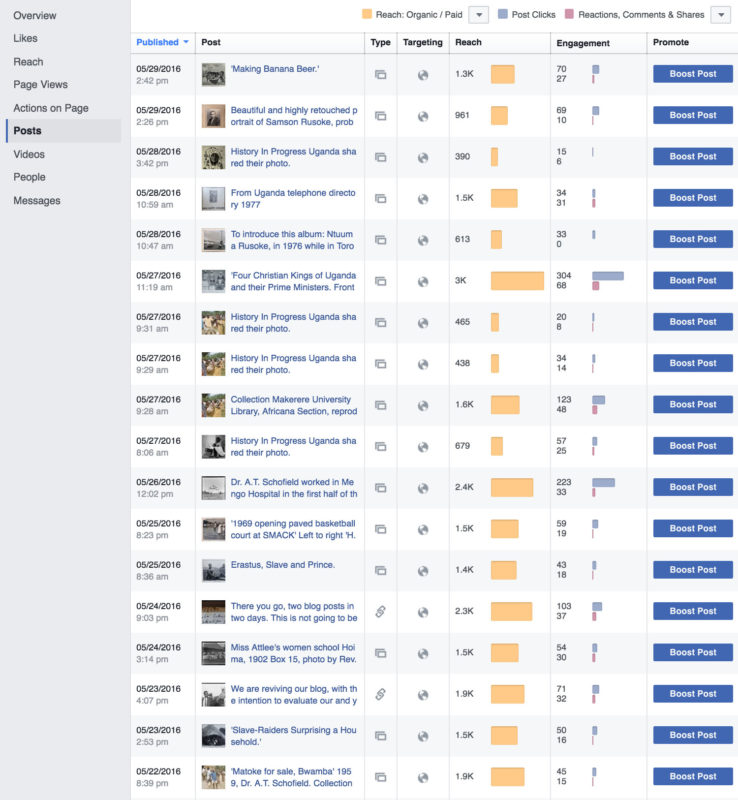