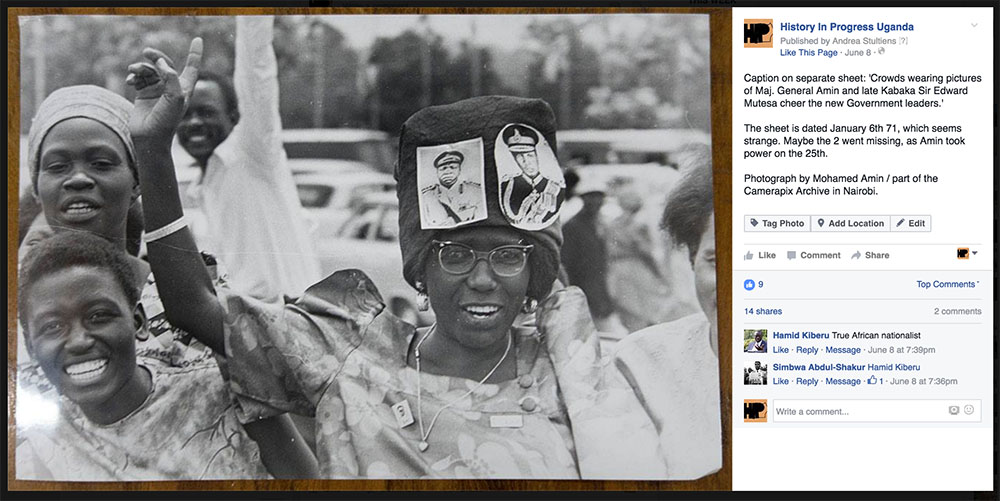 The photo above was made by Mohamed Amin, the legendary Kenya based photojournalist, who shared his last name with the newly (self?) appointed head of state at the time he made the picture. The photographer’s presence in Uganda at the time came around like this:

Mo got wind of the story [of the coup], and hurried to Nairobi’s Panafric Hotel where he had learned the deposed leader was ensconced, occupying the entire top floor. He filmed the intense security and several of Obote’s minsters, but aggressive guards blocked his path as he tried to film the premier and his entourage leaving the hotel to catch the plane to Tanzania. Nonetheless his coverage of the diplomatic furore made international headlines, despite Obote only being in the country for five hours. […] Mo knew the real story lay within Uganda, and resolved to get there as soon as possible to film Idi taking the reins of power. He booked a charter flight, but the pilot would not risk such a trip without clearance from the Ugandan capital of Kampala – a reasonable request in the circumstances as Idi’s troops had already shelled Entebbe Airport, killed two people and caused extensive damage. An undaunted Mo explained what happened next. “At the charter company I booked a call to the Command Post in Kampala. I hoped I might be able to contact someone with authority to give me landing permission. Eventually I got through and gave it my best shot. I said, ‘This is Mohamed Amin. Can I speak to General Amin?'” Mo was asked to hold on, then a voice came quickly on the line. “This is General Amin.” “I was knocked out. I’d got through just like that. I’ve always believed they thought I must be a relative. Anyway, I wasn’t going to waste an opportunity so I said ‘Sir, I am Mohamed Amin. I’m a news cameraman. I have just heard the news and I would like to come to Uganda now, and record the events. Can you help me?'” “He said, ‘Yes’, you are welcome in my country. Everything is fine here. The people are very happy that I have taken over.'” (From ‘The Man Who Moved the world’ by Bob Smith and Salim Amin)

Mohamed Amin’s photo of some people that, indeed, appear to be very happy, was according to Facebook insights last week’s most popular post. Which I kind of expected. I was right. This time. Anything with either of the two men usually finds its way. So why not a photograph with both of them, even though not directly, but in photographs placed on a smiling lady’s hat.

We do not know who made the photo below. It was posted on Facebook on May 9th, before we started our weekly evaluations. It was noticed, but by far not as much as I expected it to be. No Mutesa or Amin here. But a strong image that is well composed and, just as much as the other one, connected to one of the defining moments in Uganda’s history.

What follows is a mix of remarks, questions, assumptions and speculations from my side for you to comment on. All related somehoe to one or both of the photos,

* Ssekabaka Sir Frederik Mutesa II was the first president of independent Uganda, Idi Amin (who (also) had a lot of titles) was the third.

* On May 24th 1966 (see this previous post or Ebifananyi 5 for an eye witness account, not directly of the event, but of the day from one particular perspective) Idi Amin was ‘leading the troops’ in the ‘battle of Mengo Hill’, ordered for by Uganda’s second president Milton Obote (do you think the lady carrying the two portraits of the armed men on her head gear less than five year after the attack was aware of this? And if so, then isn’t why this reconciliation? Or was the photograph not made, maybe, in relation to Idi Amin’s coup and take over of that same Milton Obote’s rule, but on the occasion of Mutesa’s state burial in Uganda, which would then be two months later in April.

* The photo by Mohamed Amin is slightly messy. There is the cut off face on the right, the man in the white shirt behind doing a minor photo bomb. These elements do not lessen whatever value could be assigned to this photo. What they do, is add to its feeling of this being a ‘real’ moment that with a ‘click’ was captured.

* We did not see an ‘original’ of the photo below. Neither did we see a copy of the newspaper. Not yet that is. We will try to look it up in the not too far future. For now what you are actually seeing is a screenshot, of a pdf, that includes this photo. The pdf used to be downloadable from the website of a Canadian library. But while writing this post I found out that it no longer is. This is the closest I can get you to it, it seems. But back to the photograph itself. It reminds me of a couple of paintings from the canon of western art history. Its triangular composition brings Medusa’s raft to my mind. And the guns take me to what probably is Spanish painter Francisco Goya’s most famous painting. Except that I, looking at the photo, feel as though I am in front of a firing squad. I can see all the faces of the soldiers. No photo bomber here. It is all just too perfect. Could this be a photo that was constructed by its maker? Just like the paintings it reminds me of… And could this be one of the reasons why it was not picked up? Or is it just the absense of Big Men… 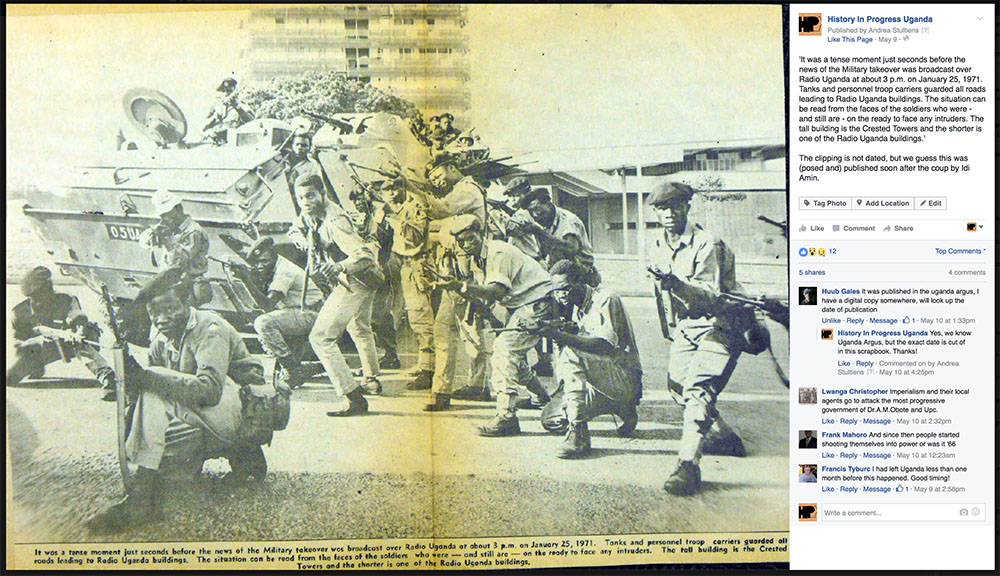 N.B. There is something funny happening in the Monitor article, inserted in one of the links above. In it Henry Lubega, the journalist writing the article (and doing a great job at recounting and re-earthing stories and materials related to Uganda’s pasts) is mentioned not only as the author of the text, but also of the historical photographs with it. Henry may have been responsible for making the images available. Somehow. But seems to be too young to have been on the spot at the time to make the photographs. Where should the credit be to make things traceable and clear? And then there is a second Monitor article that uses the photograph with the tank reproduced from another copy of the newspaper, as indicated by the stains in the top left corner of the image. One of the faces of the soldiers in the middle ground of the image is circled. According to the article he and some of his colleagues were quite instrumental for the way history unfolded. Without them Amin might not have been on the ladies headgear, next to Mutesa, at all. Again according to the monitor article Amin was asked by them to become president, in order to save them: ‘We said if you don’t want to be president to protect us, we will kill you as well. We were very scared for what we had done. And knew only Amin could save us from going to prison’. No (other) reference is made to the photo. It is just there…

Links to the albums the two photos in this post are in: 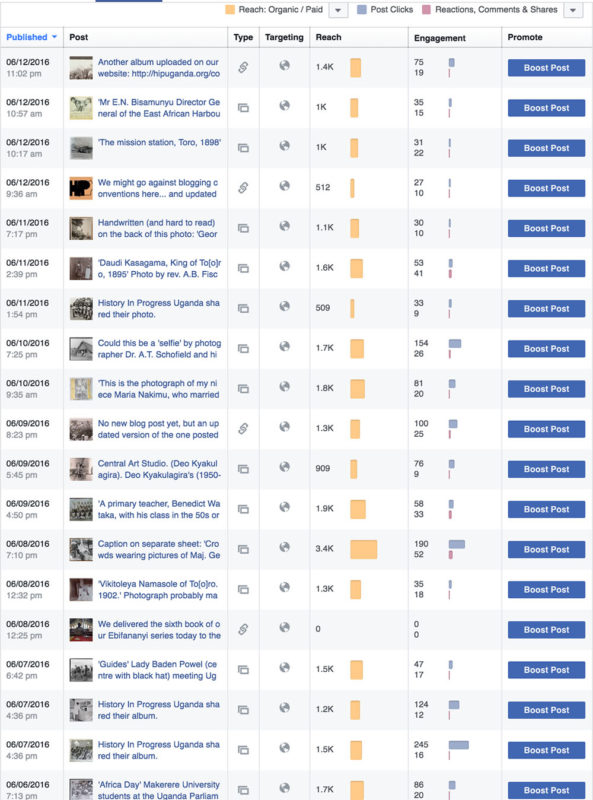