On Wednesday we found a message with some photographs in our inbox. The pictures were kindly shared with us by John Wood, and came from his family collection. It is always a pleasant surprise when something like this happens, and usually we share it, or something from it, immediately. That also happened in this case. And then traffic on the HIP Facebook page exploded for a while. The image posted may be the second most popular post up to now. 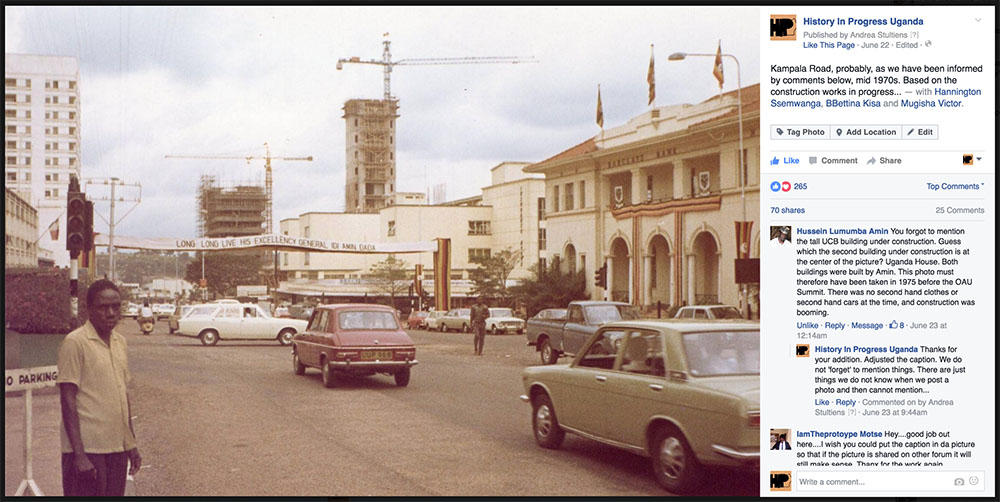 We see a part of Kampala Road, leading to Jinja road, around the junction with Entebbe road. We see some cars, an arch celebrating Idi Amin, some of Kampala’s landmark buildings under construction. The image is a full colour one, but it is also a bit yellowish. It looks, based on a rip in another photograph in the same collection, as if the material version of the digital file we got is a print. The other pictures with this post are 35mm positive slides. These slides can, just as prints, change colour over time, and of course the specific brand used has its own colour characteristics. But when digitising slides it is, in addition, almost unavoidable for some colour change to happen.

On the left of the photograph above we see a man who seems to be, unlike the rest of the scene, aware of the photographer. He was noticed by one of the commenters on the photo, but without being very specific. The led to another commenter reply as if it was Idi Amin, the subject of the arch, who was the subject of the remark. All a matter of perspectives, points of identification, interests and priorities…

So, if likes and shares are signals of some sort interest and identification, then what could it be that makes this particular photo, all in relative terms and within the grace of Facebook’s algorithms, go viral? 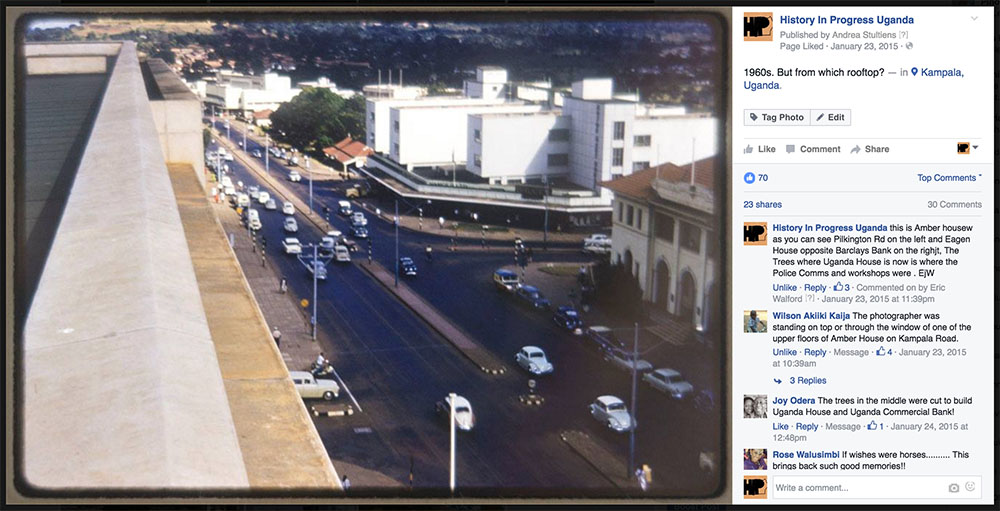 First of all, I think it may have to do with the image being in colour. Even if not fully realistic, colour photographs approach the way we see the world more closely than black and white renderings of it. The presence of colour brings what is seen on the photographs closer to the present.

The earliest photo made in colour in Uganda that we have come across so far dates back to 1933. It shows the entrance to Kasubi tombs and was made by a visitor from the Netherlands. He used a technique called autochrome in which potato starch ‘carries’ the colour. This cumbersome process leads to very charming but grainy photographs.

There is another set of images that has colour pictures and is still older. In this case the colour was not photographed, but added later, leading to imaginative colour renderings of ‘real’ views. Even here for me, well aware of all of this, the colour in combination with the photographic nature of the images still sparks another kind of identification than black and white images do. 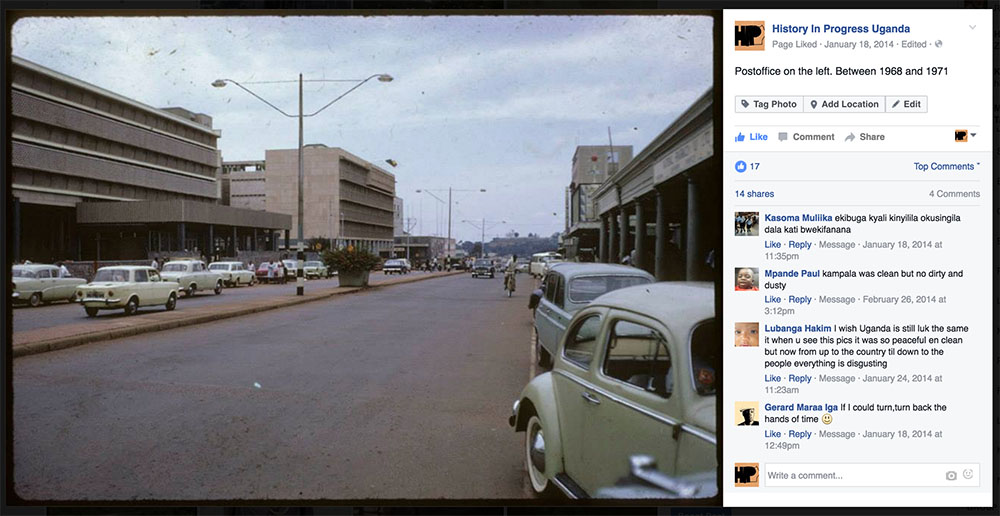 Then there is the recognition factor in relation to identification. We are not only told that this is Kampala road but can confirm based on what we can see and therefore know. There is for instance, the case of this photograph from (probably) the 1920s. This is also ‘Main Street’, which would become (who knows when and how?) Kampala Road. The camera is pointed in the other direction, towards the west. And, more importantly, none of the structures on the photograph are still there.

Crucial in the possibility to recognise is of course also its production date. Several of the people commenting to the post of the photo above mention that this is how they remember Kampala road. They have a direct connection, not with what they recognise from walking Kampala Road in the present, but with the images from the past in their head.

The third important factor that I think contributes to the photo’s popularity is its narrative, the way it points to the times around it and the associations linked to those times.

Even though every photograph is made at a specific moment, with a particular, usually short, duration of exposure, it takes some distancing in time for it to include signs of historical significance. Details that probably had no relevance for the maker of the photograph, or were at least not the reason for the picture to be made, become points of interest. With the photographs with this blog post, the most obvious of those details is the presence or absence of cars on the road. But the photograph above has more than cars on the road as by-catch. It has the landmarks under construction (that sparked of some discussion with the post as to which president was responsible for them) and it has the arch (celebrating the most controversial and infamous of Uganda’s presidents).

A photograph of an urban environment can show a state of things. Something seemingly stable and fixed. But in this case it signals all sorts of events and temporalities that we can relate to in many ways, always based on personal experience and things we think we know.

Which bring me to a last thought. Why were these photographs made, and by who? Why was it considered to be relevant to, next to loved ones and special occasions, photographs a part of the city that is ‘just there’?

None of the photographs presented here were made by professionals. Three out of four were made by visitors whose presence in Uganda was temporary. This temporality lasted, in the case of the Wood family, for several decades. They left Uganda in 1977. Maybe that should be an indication for the moment and explain the reason why the photograph was made. Could it be that the maker of the picture knew he or she was going to leave and wanted to be able to remember what was left behind?

The only one of the pictures by a Ugandan was made from a particular vantage point (Amber House rooftop) and with a particular position and interest. Eng M.W. Wambwa was town engineer in Mbale and Kampala.

The other two photographs were made by Europeans and Americans who lived and worked in Uganda and left. The one with the post office on the left is part of a slide collection made by a doctor who worked at the Uganda Cancer Institute, and the last one was made by one of the visiting teachers at Gayaza High School. 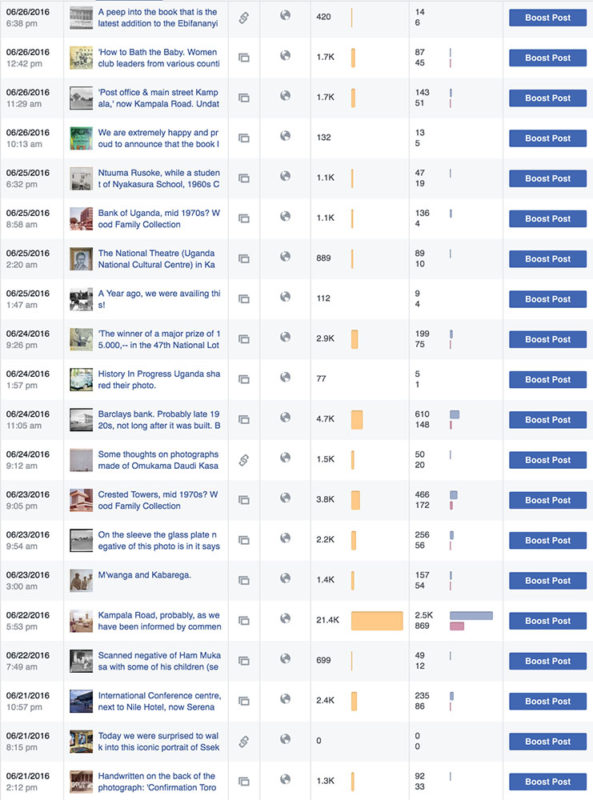