Ebifananyi 4 - Simuda Nyuma, Forward Ever Backward Never - Based on Images by Ham Mukasa 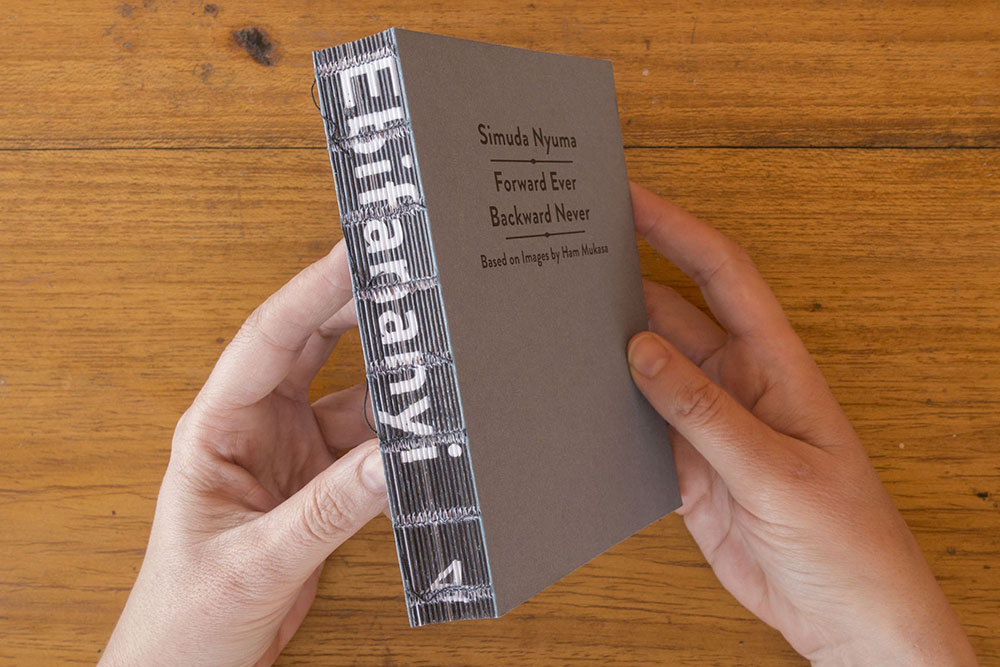 This is the last post in which we share the reviews of the books in the Ebifananyi series written by Joel Benjamin Ntwatwa, a.k.a. Nevender.

Ten days ago the sad news of Joel’s death reached us. We first heard Joel’s name when we were planning the launch of the 6th volume in the Ebifananyi series with the writivism festival in 2016. The festival organisers asked three reviewers to write about the book. Joel was the one who delivered. We were very impressed by the review. We met Joel in person during the festival and stayed in touch. This led to a commission to review all of the Ebifananyi books. The other seven reviews can all be found on this blog. Each one of Joel’s readings helped us to understand certain aspects of the book in question better.

In an In Memoriam posted on his Facebook wall Bwesigye Bwa Mwesigire makes the remark that he feels that Joel’s “role as a reviewer was not always appreciated as much as it should have.” We hope his qualities as a reviewer, clearly demonstrated in his readings of our books, will be part of long lasting memories and appreciation of Joel as a person and as a writer. 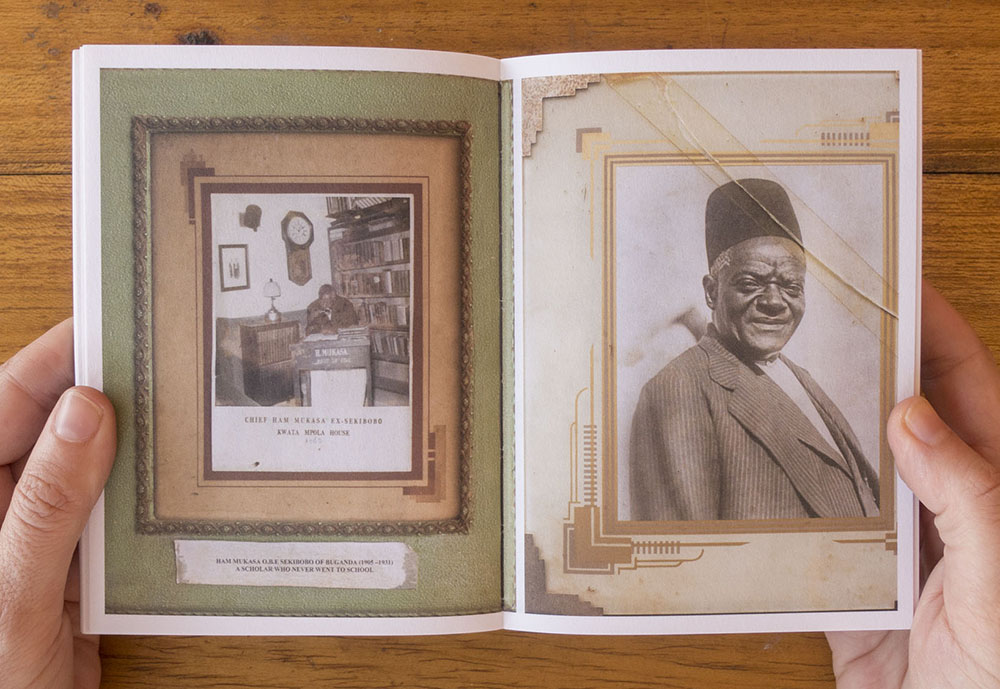 There is an unsaid tension between text and imagery. However, perhaps this applies more to the producers of text and imagery than to others engaging with them; writers believing more can be said by text, “artists” believing “a picture is worth a thousand words”.

The problem with the latter is that the thousand words could also mean thousand interpretations and maybe that is not really a problem depending on which angle you come from. Some believe the two work in tandem and this book can be a testament. How do images and text relate, can one be interpreted well without the other?

In this work by Andrea Stultiens / History in Progress, history is rediscovered, re-examined and reinterpreted through different eyes. The book in itself is like a conversation about Ham Mukasa mindful of the things he knew and the experiences he went through.

He, as a person, was placed in an interesting time in what we call present day Uganda, and was gifted with the keenness of a scholar. Ham Mukasa is probably one of the best examples I have come across that cement the need for documentation.

The team that executes the project that produces this book interacts with him as though he were alive. Exploring his photos, his journals, his residence, his books and it is the book “Simuda Nyuma” that is the focal point here. Simuda is a triptych in which Ham Mukasa documents three Kabakas and their times.

Andrea Stultiens truly notes “A lot can happen in a lifetime.” 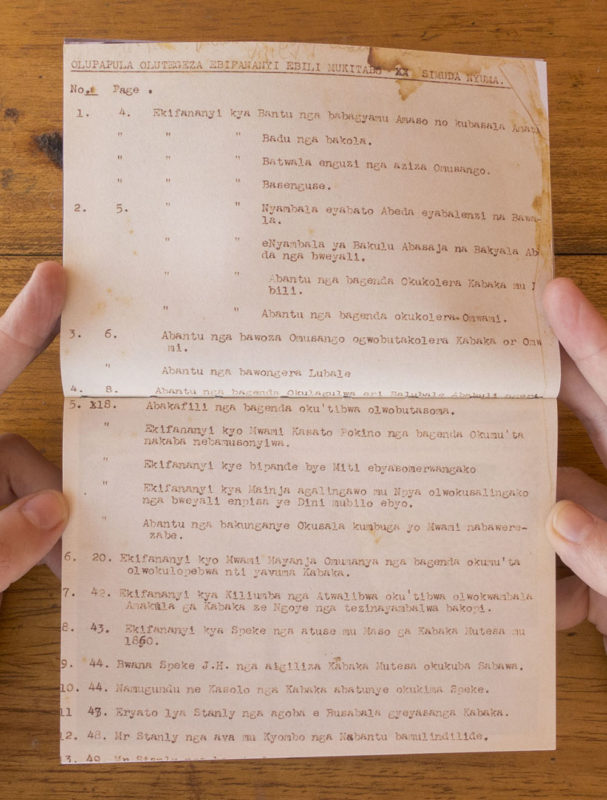 Like I said before, Ham was placed in a particularly focal point in history – born around 1870 during Kabaka Muteesa I’s reign and passing on in 1956 during Kabaka Muteesa II’s time, he was alive during key times of Buganda’s history and subsequently Uganda’s history. And he wasn’t just alive in that time, he was close to the centre of the action and to many a historian’s delight, took notes. He documented.

The advantage the History in Progress team brings is the digitisation of his life, digital being the next form of documentation. Many of the images in the book are obviously getting worn out due to the test of time and the elements. And digitising makes them easier to preserve.

However in addition to that there the different artists that are brought together to reinterpret his triptych. Stultiens found a list of descriptions for the images meant to illustrate the words. The illustrations themselves are not known to exist, so the artists took up the challenge to do so from their present day perspective. 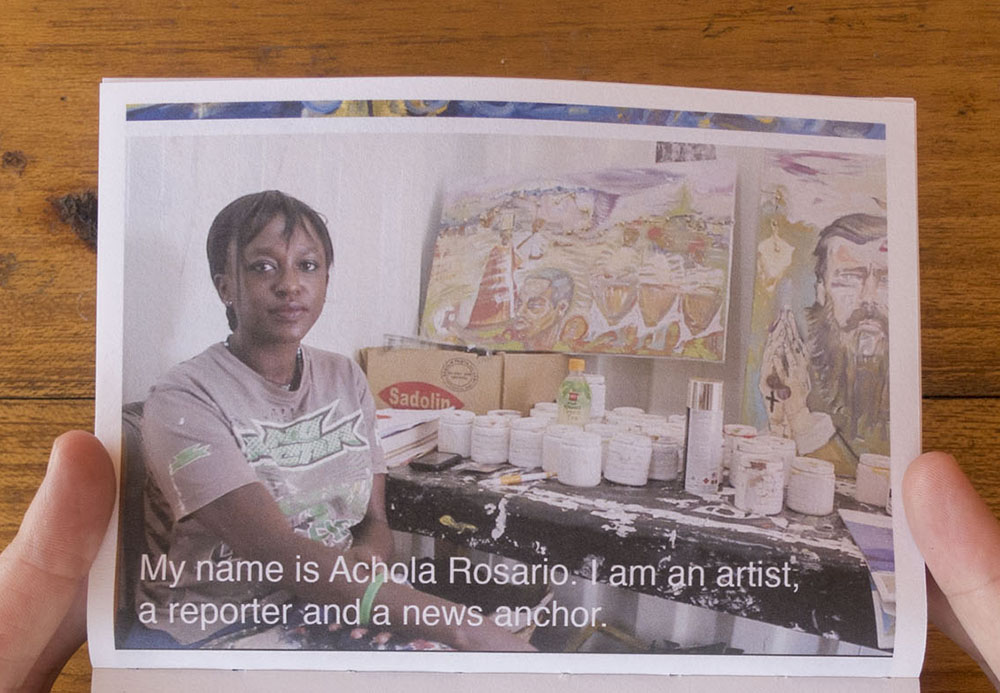 There are the works of Achola Rosario, who notes on her discovery and study of Ham Mukasa that “I found out more about the colonial strategies in appropriating history, creating allegiances, and finding support from Africans they worked with. These Africans were not victims, but those who were in direct contact with colonials used it for their own benefit, and not necessarily for the good of the people.”

I find that I would share in Emmanuel Lwanga’s fascination about what is said to be the erstwhile traditional clothes of the young. Boys used to wear animal skins but the girls “wooden skirts”. 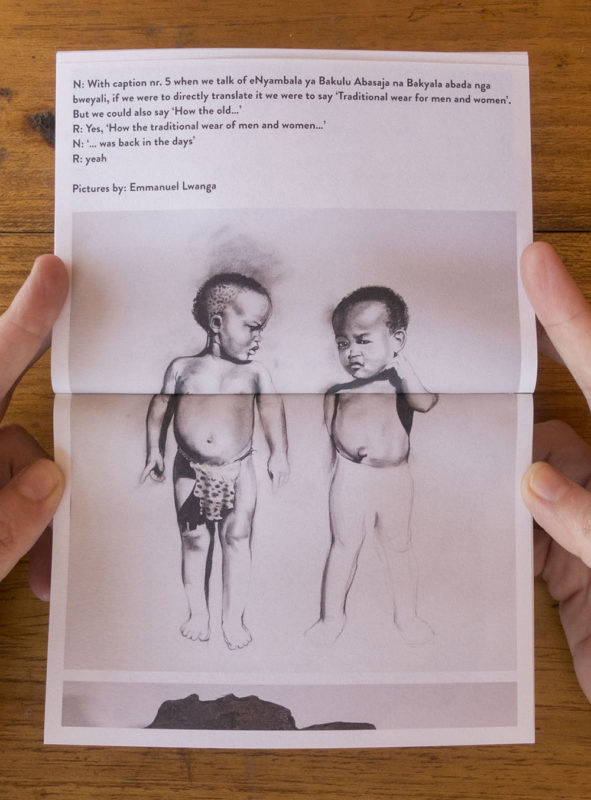 Now what I did not expect was how 4 different artists all chose to latch onto the feminine in their reinterpretations of Ham’s descriptions.

Ian Mwesigwa tackles the religious leaning of the feminine. Women offering to small gods. However he questions art, its stereotypes. He leans towards “the non conventional, the nonformal, the non logical.” Reading his thoughts challenges our interpretation of art and how we think of history.

Violet Nantume is aware of the presence of women in the Kingship of Buganda. Her approach is provocative. In dealing with her thoughts on colonialism, neo-colonialism, ancient practices, the power structures in society, she wants to provoke conversations about the unsaid. Her thoughts are very brave, her approach braver. She notes “In my artwork, the undergirding theme is context, the relevance of yesterday interpreted in a way that is relevant to us today.” 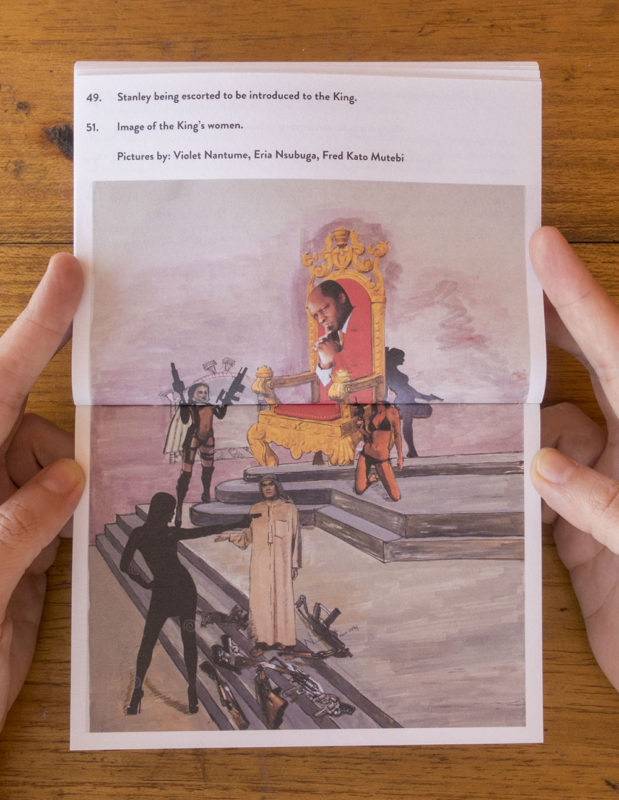 Eria (Sane) Nsubuga was aware of the conflict black women today are grappling with, especially concerning their identity. Some rediscovering a blackness, others trying to feel white. He is clearly passionate about the political context and aware of the changing roles of women today. I like his comment on the politicians – the “fat cats”. However back to the women, he recognises that

Fred Kato Mutebi took on the idea of the past, the present and the future of women. In recognising the role of women, he reveals “As a matter of fact, all the subjects of the King at one time are his women. Including men [….]. Baffe means ‘our husband’. Even the men say it.”

The two other artists’ thoughts featured are Sanaa Gateja and Papa Shabani. One can be called a veteran, the other a fast paced yeoman.

What is interesting is that they seem to be on opposite sides of the coin. While Sanaa seems to be in praise of Alexander Mackay (one of the people Ham covers in his book), the Scottish missionary who introduced Christianity but along with it a lot of literacy, technology and education, Papa seems to be more cognisant of the fact that what the effect of people like Mackay was, was rebellion in a flourishing Kingdom which was construed as martyrdom.

Sanaa captures the similarities of Scotland and Uganda in photography while Papa focuses on the rebellion of the Kabaka’s subjects and the punishment they got for it. 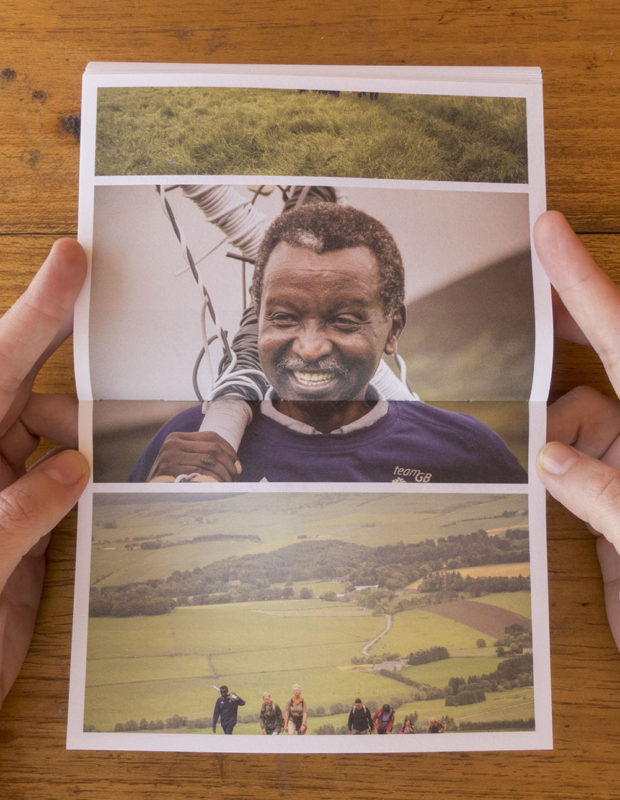 For me personally though, the best part about this book are the conversations on language between Nathan Omiel and Nansubuga Robinah, its interpretation, translation and transliteration.

As a Muganda, looking at the descriptions of Ham Mukasa can at first sight be straightforward or downright confusing. However, when the two, Nathan and Robinah, came down to the nitty gritties of language, I wondered about the meanings of a lot of things.

For example, there was a description

42. Image of Kiliumba being taken for his execution for fitting in the king’s presents (clothes) before the King tries them on.

The first response from Robinah was “In Luganda there is a lot of hidden meaning […]” She continues and notes that in “Ham’s way of writing it is very clear that the King is an important element and that whatever he touched or did was sacred […] in most cases it is not very direct.”

I rethought that statement and thought that perhaps Kiliumba just had his way with one of the Kabaka’s women? I don’t know. 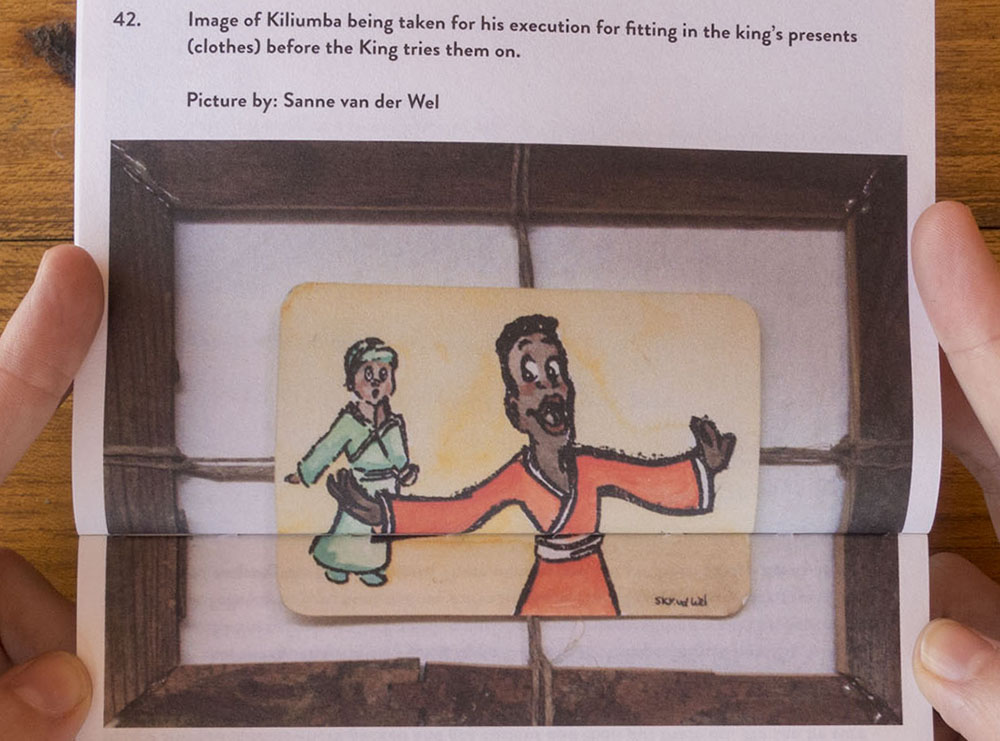 And indeed, these issues of ambiguity, meaning led to a discussion of whether Luganda was the better language or not for on one side, Robinah argued those who knew the language would not see the ambiguities however those who did not would. Nathan finds that a mere translation is problematic, considering issues of tenses, place and more.

The word ekifananyi itself could mean photo, picture or image.

It went full circle to the title. Simuda Nyuma. Is it Luganda? Swahili? What does it infer? Not looking back? Should it be Sidda Nyuma [I’m not returning]? Is that my own interpretation? Yet this book is actually about going back to explore the past in the eyes of one who was present then. I myself realised it actually translated into “do not go back” although I was more used to the term Temudda Nyuma [I am telling you (plural) not to return]. Luganda keeps surprising. It asks many questions, is there an unacceptable system of understanding this language given there have been barely 200 years of literacy that has been mostly privileged to the upper classes?

Nathan and Robinah however agree that it should ideally be “Do not go backwards”. And indeed this book is one of those efforts. At least in terms of gaining new knowledge, understanding new things, digitising the past etc. Its irony is that we have to go backwards to not go backwards. And for a title thought up by Ham Mukasa, I do believe he well deserved the title “The scholar who did not go to school.” 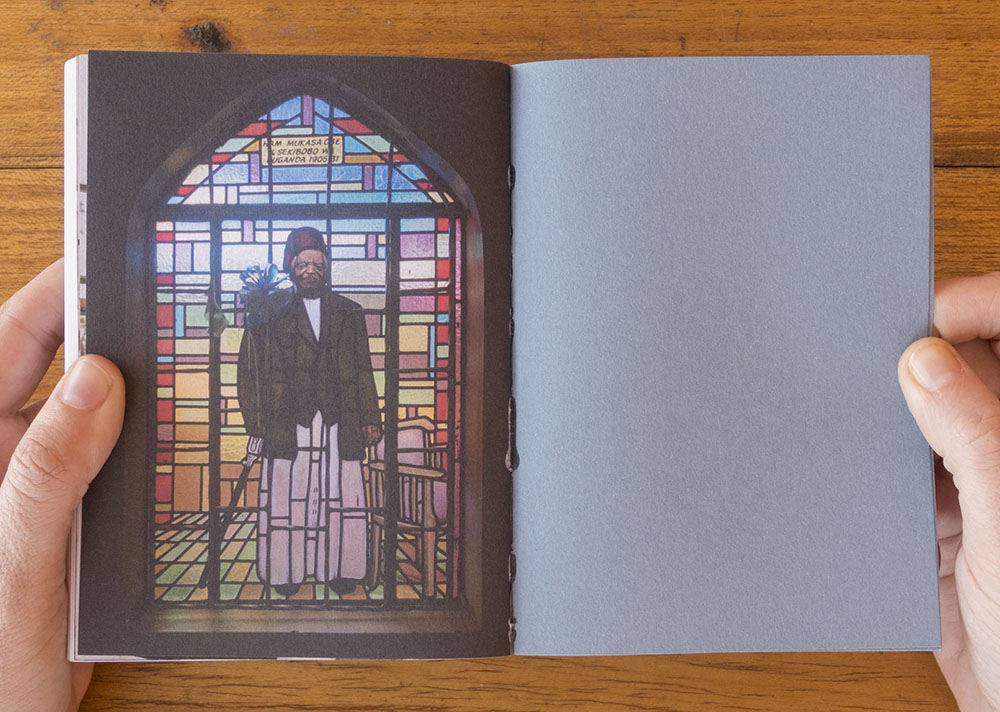 Ebifananyi 4 can be bought in Kampala at The Uganda Society, Afriart Gallery Kira Road, or the Design Hub Kampala.

International orders for the book can be made through distributor Ydoc Foundation.