Staying Alive (why are we taking and looking at so many photographs?)

On October 7th 2017 the Uganda Cancer Institute and some of its patients were featured in the New York Times. Dr. Marissa Mika, who shared the historical photographs related to the institute to us, also brought this post to our attention. She says that she “was glad to read about this initiative to improve access to quality cancer drugs. But [..] was immediately put off by the decisions made by the editors, reporter, and photographer regarding how they chose to present the Institute.” She said as much in a Facebook post flagging the article. HIPUganda’s R Canon Griffin responded saying that he was

“totally lost on what is wrong with the photos or the captions or any of the stories (except that it’s a bad situation) … it just looks exactly like what you would see there … even easier … Is there a secret in this world that I ever know!? Is it photos being from before the new wards came up?”

“For me it’s the reporting. It’s the fact that not one of the sixteen practicing oncologists in Uganda is interviewed or quoted. There isn’t even a nod to the deeper history of the UCI, which is where many of the now generic chemotherapy drugs the article speaks about were tested in the 1960s and 1970s. I also think, generally, it’s irresponsible to present the dilemma of drug access without nodding to the broader structural issues of improving cancer care in eastern Africa, be it revamping pathology services or expanding out cancer awareness. Maybe I’ve just been working at the UCI for too long and am too invested in finding creativity in times of crisis. But I’m put off by the intentional bleakness and the tumor porn in the photographic choices. And I think it’s been framed as one more pharmaceutical salvation story. It’s not surprising to me that Shoemaker (the photographer of the pictures with the NYT article)) is based in South Africa.

Since arriving at the UCI in 2010, I have struggled with how to adequately represent the balance between vitality and mortality on the wards and in the archives at this site. Images, especially, are complicated. The Institute was founded in part because of the power of photographs to capture how fast growing, catastrophic malignancies responded to chemotherapy drugs. The striking features of Burkitt’s lymphoma — swollen jaws, bulging eyes, distended tummies — made it easy to identify in up country hospitals without immediate access to pathology services.” 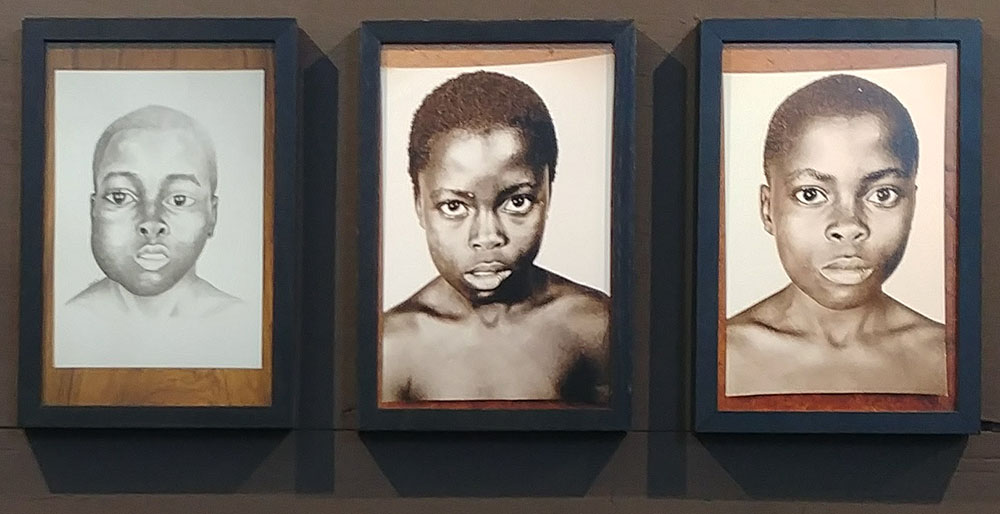 Marissa challenged me, the other half of HIPUganda, by echoing Canon and asking, “why is what we made any different from the New York Times article?” Here is my reply:

The shortest answer to the question is already embedded in the introduction to the question. We had the time and opportunity to enter into a conversation, or as anthropologist Tim Ingold would call it a ‘correspondence’ with historical photographs and the people and places we encountered in relation to those photographs in the present. I do not think it is fair to compare Shoemaker’s photographs, published in a newspaper with a global reach, with the pictures I decided to publish in a book that has a print run of 1000 copies only.

My initial response to the photograph that heads the article was ‘this is not a person with a tumor, it is a tumor with a person’. This is one of the things I tried to avoid when portraying patients and caretakers at the Uganda Cancer Institute. I did this by making the people I photographed not objects of my gaze, but individuals who explicitly play an active role in the production of the picture. They look back at me, and, seen from that moment, at projected future spectators. Their illnesses are present of course. It is why they are where they are, but it is secondary to their agency as a person in the photograph. The photographs are theirs just as much as they are mine as the operator of the camera that produced it. In almost all of the photographs my gaze, now no longer that of a photographer but of a spectator, meets the gaze of the people photographed not a tumor. It is easier to identify with eyes looking at you than with a tumor.

The photographs are ‘framed’ by captions that support the othering already signalled in the compositions of the photographs. The most obvious examples are the photographs of Paul Mugumya and Brenda Nakisuyi. The former picture is covered and framed by the headline of the article. The boy is the backdrop to, and carrier of ‘Cancer Tearing Through’ the continent he happens to be born in. The caption adds other ‘victims of Africa’, in the surgeons who performed three hernia operations before ‘they realized he had a blistering football-shaped tumor.

Brenda Nakisuyi is seated on a bed. Next to her on the wall there is a poster with a healthy body (of a boy who seems to be white or Asian). On her t-shirt we see the words New York and (white) hands with colourful painted nails. She covers her eyes. It looks as though she does not want to be identified with her tumor. But she is identified in the caption. The photo and the captions contradict each other and suggest that the person on the photograph is not part of a reality that really implies the reader of the article (see this clip in which Ariella Azoulay speaks about the notion of Visual Citizenship for more on this).

After seeing the article and giving it some initial thoughts I received an email from another friend. She rightly suspected I had already seen it. She considered it to be ‘right up my alley’. She said she decided to sent it as ‘an eye-opening, powerful recounting of tragic situations across the continent’. When I shared my concerns about the use of the photographs in the article with her she replied with a valid remark that had not yet entered my mind “You know it wouldn’t be like that if these were white bodies in front of the camera.”

Marissa and I had the luxury of not being in a rush, not having editors breathing down our necks. We had time to think about the responsibilities that working in and with the people at the Uganda Cancer Institute gave us. We developed our own version of the ‘ideological commitment’ Carina Ray mentions in an interview on Africa’s a Country: “I think it’s crucial, especially as Africanists, to think about what our work means for the present and future precisely because the African past is always at play in the ways that people think about, talk about, write about, make policies about, etc., etc., Africa today. The very fact that our field is in itself a repudiation of centuries of racist thought about Africa’s lack of history and its lack of coevalness with the West, points to the urgency of actively engaging the present and the future, when and where possible, in our research.”

I made the first photographs  that ended up in the ‘Staying Alive’ book and the reproduction of the historical photographs Marissa brought to us in July 2012. I worked with these materials for almost five years. Went back and forth, combined texts and images this way, that way…

We had the luxury of not having to announce a projected near future by touching on a distant present. And that is exactly what the New York Times article looks like to me.

The screenshot that starts off this post was taking from the New York Times. The other photographs are documentation of ‘Staying Alive, documenting the Uganda Cancer Institute’ as presented at the Noorderlicht photo festival in Groningen, the Netherlands. The theme of the festival is ‘Imagining Science’. This particular presentation of the material therefore focusses on the use of photographs by Dr. Denis Burkitt in relation to the founding of the Uganda Cancer Institute.

There is much more still to be thought through and to write about concerning the visualisation of cancer in general and this series of pictures in particular. For instance how and why the historical photographs were transformed into drawings has not yet been fully addressed here. Neither has the question how and why these drawings have met and continue to meet different audiences. As with all the photographs we share, these remarks are not conclusive. But we continue to take our time to let events thoughts and words unfold. Meanwhile we are happy to receive feedback and comments. 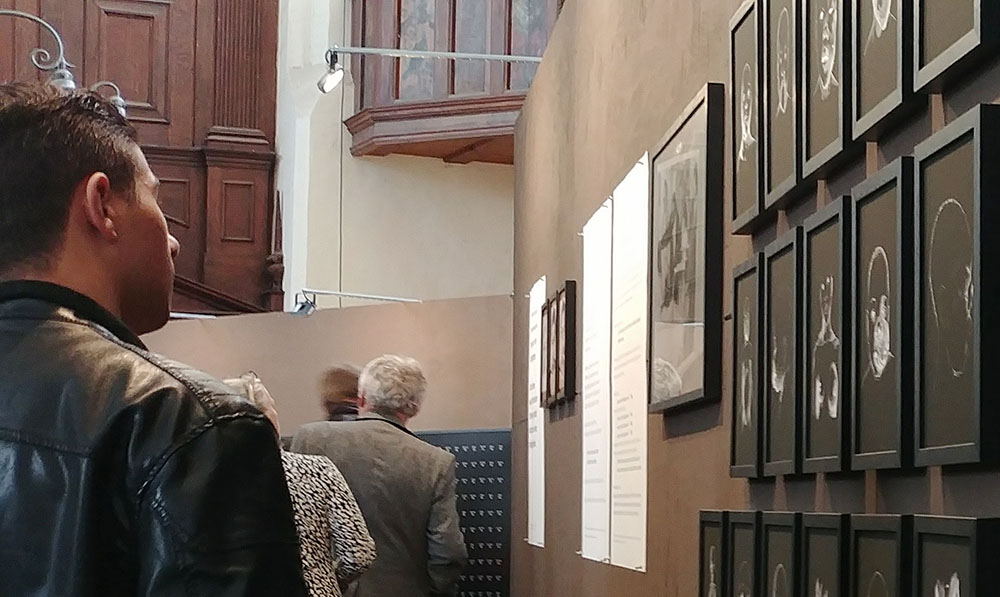 Louis Jadwong
·
#488
Hi. Interesting comparison of these two photography works. The aim of the New York Times article I guess, was to show the situation is dire, there is a crisis. If that is what it was, it is achieved. There could have been a little more sensitivity, including names, but that depends on the NYT editorial policy on health coverage. Any criticism of NYT must start by looking at their editorial policy. The book STAYING ALIVE, as the title suggests, showed the illness can be battled, and UCI is at the front of battling it, now and in the past and… Read more »
Reply comment

Andrea Stultiens
·
#489
Thanks Louis! A quick reply, without actually having looked at the policy as you (rightly!) suggest. That a news paper, however big or small its scope, has a policy doesn’t mean that that policy meets ethical standards as they develop over time. A lot has been said about ‘regarding the pain of others’ as Susan Sontag phrases it. Among them is a point made in response to Sontag by Ariella Azoulay (as linked in the blog). What is seen on photographs can be part of ‘others’, not ‘us’, or we can look at it as implying us. I try to… Read more »
Reply comment