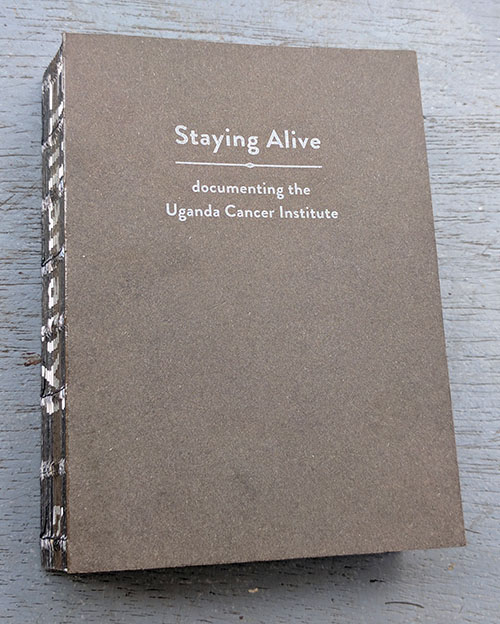 I put down the dark book and heave. The questions that ravage my mind are mostly “Why?”. Ironically, I received this book from Rumanzi Canon while admitted. I had had a conversation with Andrea shortly before about giving it a look.

I wasn’t grappling with cancer but diseases have many similarities. They do bring sorrow.

The title is “Staying Alive”. For a book that talks about cancer and the Uganda Cancer Institute where the word is “That is where you are sent to die,” it is an unusual title yet very meaningfully, very well, chosen.

It is a documentation of the Uganda Cancer Institute, profiling it from the 60’s and 70’s when it was at its height to the time of its repurposing into a bigger complex. For the person who never went there before its new face, for the person who understood little about cancer before its boom in the new millennium, the book keeps alive faces, spaces, smells, sounds of a place that only persists in memory for what might be a few of us. 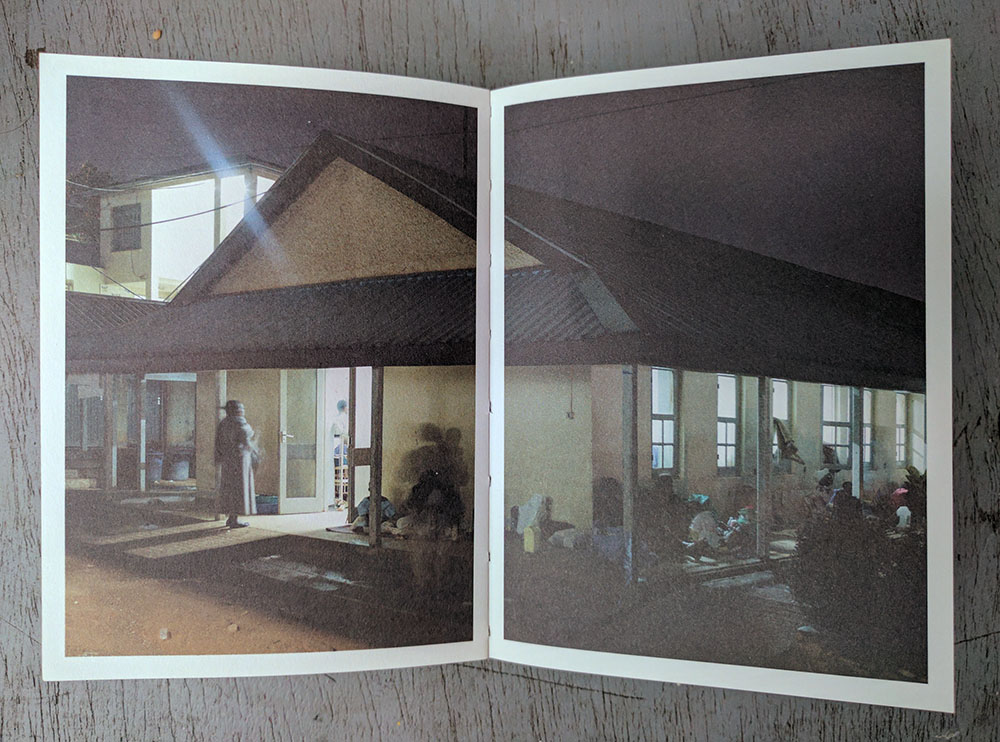 I’m keen on how the book is formatted. Andrea is a cancer survivor. However, she knows she survived mostly because the health system in her homeland is much better than Uganda’s. She knows she has more privilege as regards access to health than an average Ugandan. So her words are printed on dark pages, as though she was trying to stay in the background. “But my role is actually minor here,” she says. 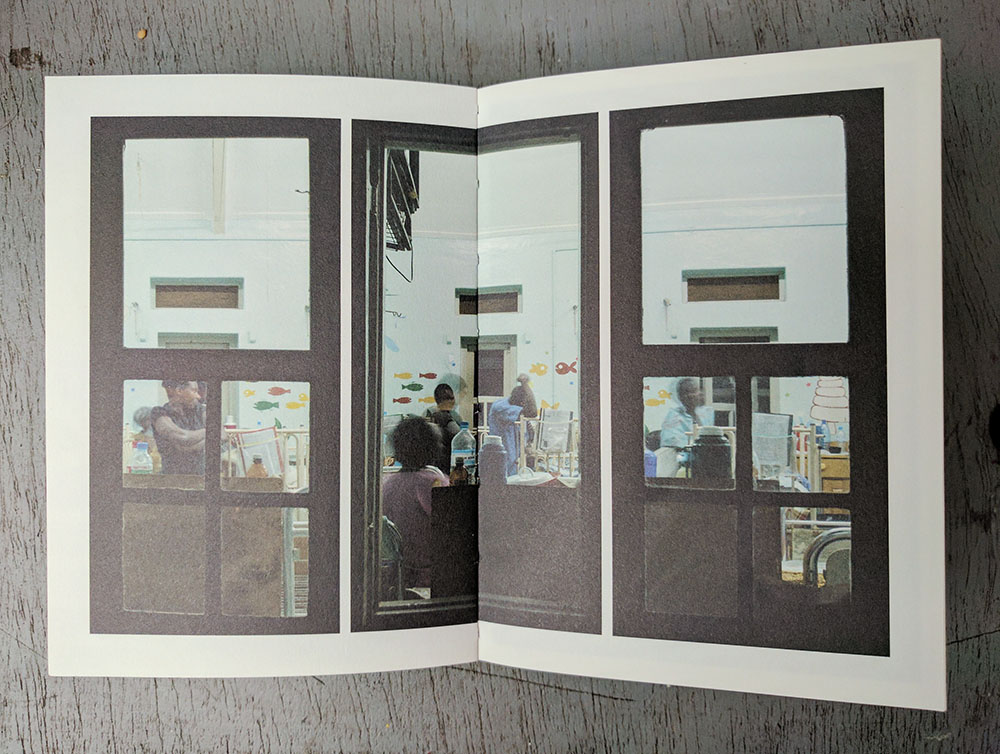 On the other hand, her colleague Marissa Mika, who invited her to the documentation project, has her words on white pages. Her thoughts are laid bare. How she starts this project, her thoughts as she walks through the ward, her parting thoughts on the people she met and got acquainted with and lost. You get an honest view as you read her words.

One thing she will tell you if you did not know, is that there was cancer research in Africa, in Uganda, during the times of Idi Amin.

UCI was a small cancer research hospital that studied the treatment of cancers common in eastern Africa but rare in Europe like Burkitt’s lymphoma. It brought together Ugandan and American doctors in studying and contributing to treatment of cancer in the region.

She came across people, folders, buildings, tents…in the records rooms, watching patients arrive on boda bodas, nurses arranging drips and giving counsel. She came to think of her work “…as straddling living archives and dying wards.”

It is uncanny though. UCI thrived in the 70’s according to Marissa. Only 6% percent patients were lost to follow up across all Uganda. Journals in the US were filled with progress about Burkitt’s Lymphoma. Her questions meet different answers some saying it was a scientific unit and not needing to be affected the way political units were.

According to Professor Charles Olweny…”if you did your work and avoided confrontation with his soldiers, you were safe…UCI was a showpiece”.

That said, archives show scrambling for repairs, electricity black outs, food shortages, breaks in medical supplies and more. Still it looked to be more successful than by 2013. 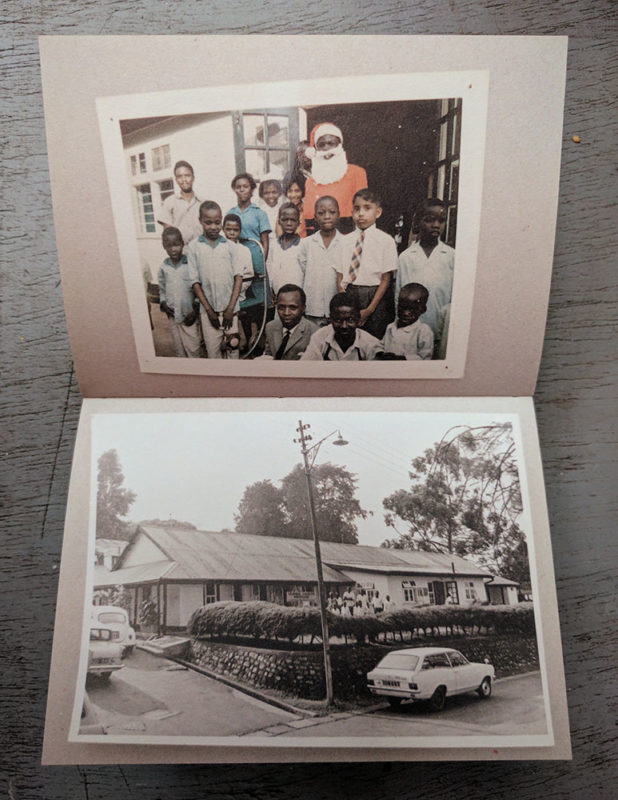 “It only took half a day to bulldoze the LTC.” But this work, this book is doing its part in making it stay alive.

You get to appreciate Marissa’s language too, like the poem about how the ward feels like an upcountry trip….

Of course, UCI eventually became the new red bricked building in Mulago with more space but Marissa and Andrea’s work kept alive all the life that happened before.

And this is where the photographs play such an important role. And there are quite a number of them. Of people, of medical samples, of wards, of the skylines, of the past, of medical personnel.

When you start going through the photos especially those taken in the 2010s, there are very few smiling faces except the glow eyed boy staring into the camera on his bed in the ward – he is in blue shirt and brown shorts with a little smile.

Many are tearjerking. An expressionless face of a girl on a bed with a brown doll on her left arm. A forlorn expression of a girl in a green dress on a bed with a Catholic pendant of Mother Mary around her neck. Her eyes are like glasses. You cannot help but wonder what she is thinking.

The photo of a man holding the hand of a bare chested boy on oxygen, eyes half closed. There is a pain in his eyes even as he looks into the camera… 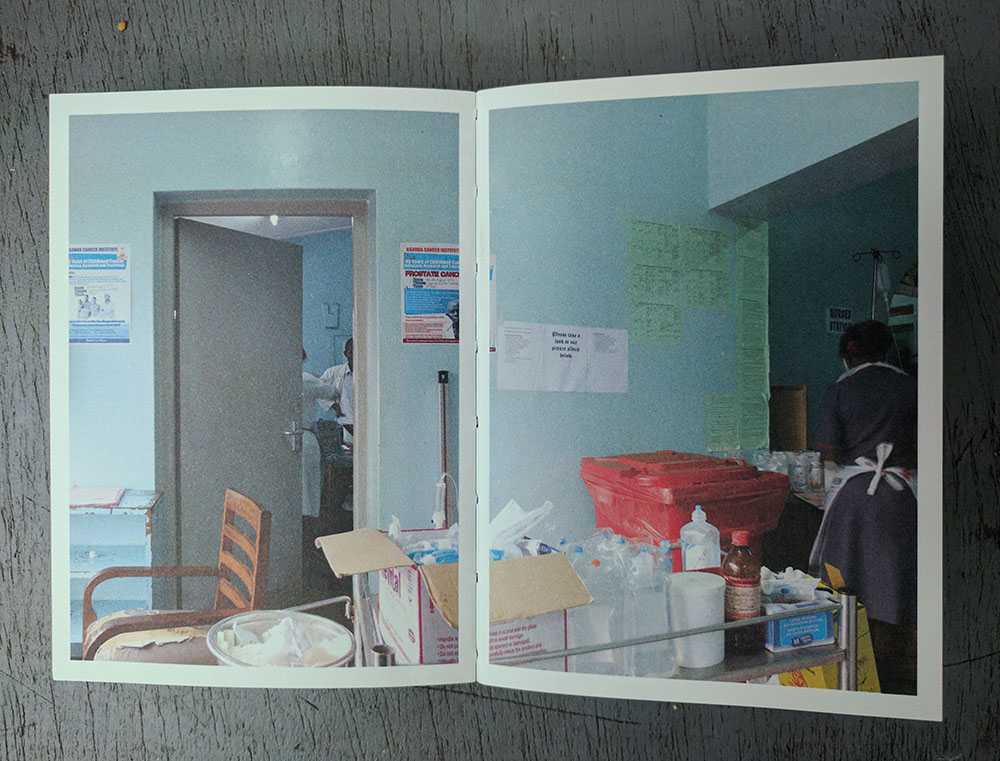 In contrast, the photos from the 60s, 70s look more hopeful, cleaner. Sometimes they are so well photographed they look like well choreographed specimen. With the black and white medics smiling with the patients, the patients not looking as glum…

There is an important photo though. One of a woman holding a baby sitting next to a boy whose eyes are swollen with mere slits as openings…There is no fear in her eyes. The boy himself insisted on being photographed. This is the part where the book goes into illustrations. There are some photos that Andrea says when she looked at she turned away, “Instantly and instinctively”. 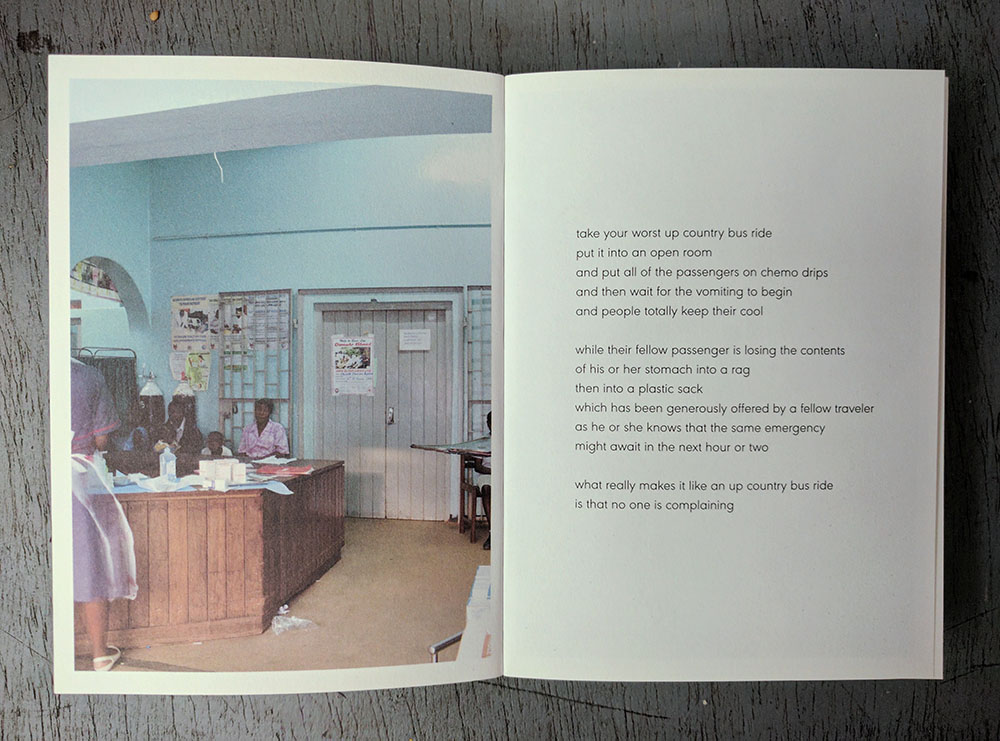 The book is not a pile of sadness. No. Find Taata S, a sliver of hope or may we say a silver lining in a condition that seems all but dark. Taata S was a “peasant farmer from outside Lira who grew sesame, sorghum, and soya beans, and who knew more about the vagaries of rains and planting seasons than how to cook or attend to domestic chores..” yet in this story, he becomes the caretaker of his sick Baby S. He does more than just that, being involved in the ins and outs of the ward, being popular with the other caretakers, giving hope to many, educating people like Marissa about the etiquette of being in a ward like the Lymphoma Treatment Centre. His wife left him to these duties but he tried much to keep in touch with the people at home, to let them know he was doing everything possible for his child.

He is a picture of strength and endurance in a situation that seems fragile and empty. But yet there are many of them, whether male or female. They did their best, in the wards each day. Cooking on their small sigiris on the verandahs for their loved ones, doing everything to keep them alive.

Andrea and Marissa try to do something similar in keeping memory of UCI alive even as it morphs into something new. 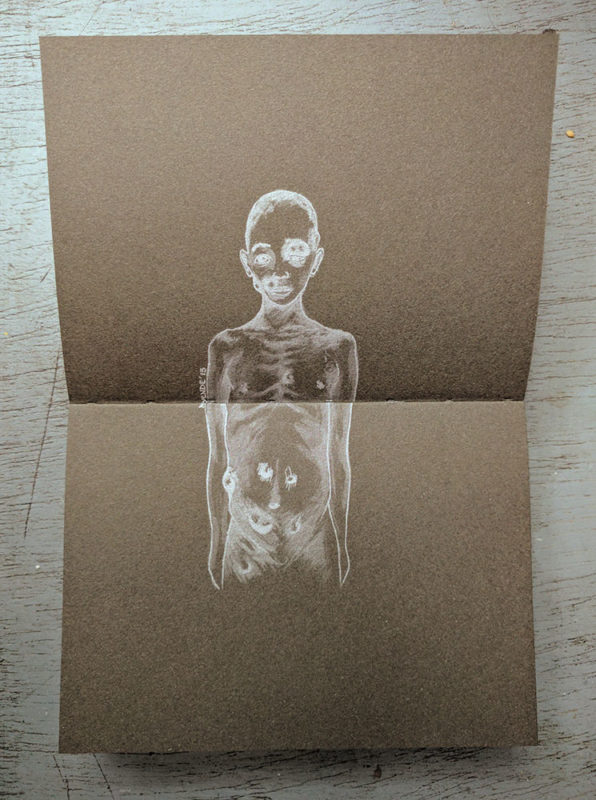 This reading of Ebifananyi 7 / Staying Alive – Documenting the Uganda Cancer Institute was written on our request by Joel Ntwatwa who last year reviewed Ebifananyi 6 / Duc in Altum – St. Mary’s College Kisubi for Writivism.

On Friday 18th of September Ebifananyi #7 / Staying Alive will be launched with an exhibition at Afriart on Kira Road. Please join us if you can Friday evening, 6pm. Prof. Olweny will honour us with his presence and receive ‘the first’ copy of the book. The book itself will be available for sale with the show from the 18th till the 26th of this August (in for now unfortunately a limited number of copies, so make sure to come to get yours @ 40k !) 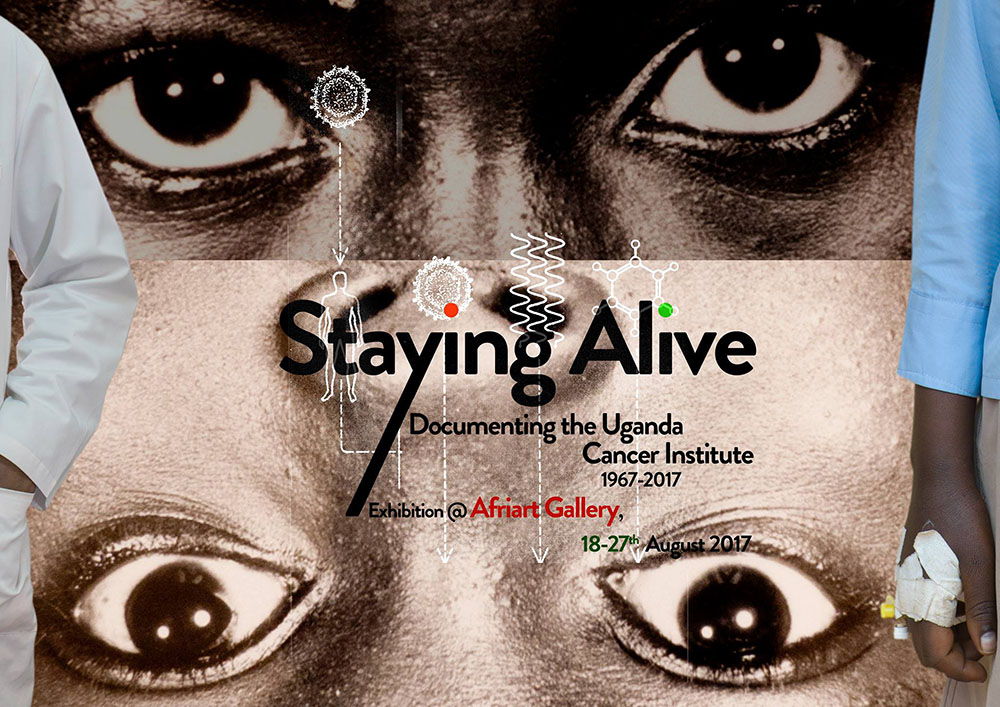 Hi. I am interested in reproducing this series of articles on UCI on a news website in Uganda. How do i go around that