President Binaisa and the Snake

This blogpost presents the newspaper articles that were sourced in relation to the story Elly Rwakoma (Ebifananyi #3) told about an alleged assassination on President Binaisa’s life. The newspapers were retrieved from different archives:

After the visual of the newspaper we quotes relevant sections from the respective articles. This is part of an ongoing investigation of the events of September 21st 1979 in Iganga. Anyone with memories or documentation of this presidential visit that descended into chaos is invited to contact us. 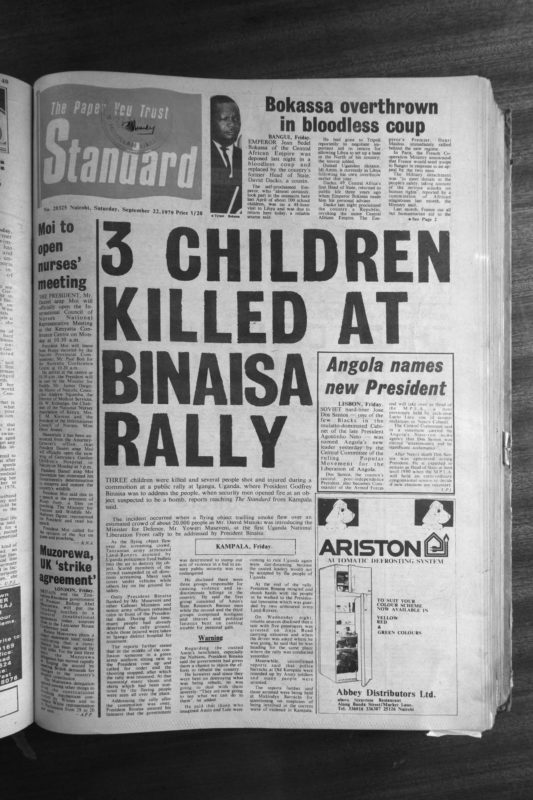 “Three children were killed and several people shot and injured during a commotion at a public rally at Iganga, Uganda, where President Godfrey Binaisa was to address the people, when security men opened fire at an object suspected to be a bomb, reports reaching The Standard from Kampala said.

The incident occurred when a flying object trailling smoke flew over an estimated crowd of about 20.000 people as Mr. David Musoki was introducing the Minister of Defence, Mr. Yoweri Museveni, at the first Uganda National Liberation Front Rally to be addressed by President  Binaisa.

As the flying object flew over the screaming crowd, Tanzanian army armoured Land-Rovers assisted by Uganda policemen fired bullets into the air to destroy the object. Scared members of the crowd stampeded in all directions screaming. Many took cover under vehicles while others lay on the ground for safety.

Only President Binaisa flanked by Mr. Museveni and other Cabinet Ministers and senior army officers remained calm in front of the Presidential dais. During that time, many people had already deserted the rally ground, while those injured were taken to Iganga district hospital for treatment.

The reports further stated that in the middle of the confusion someone in a green army uniform sitting next to the President rose up and called for order and the shooting stopped, after which the rally was resumed. At that moment many shoes and shirts which had ben scattered by the fleeing people were seen all over the place.”

“At the end of the rally President Binaisa mingled and shook hands with the people as he walked to the presidential limousine which was guarded by two armoured army Land-Rovers.” 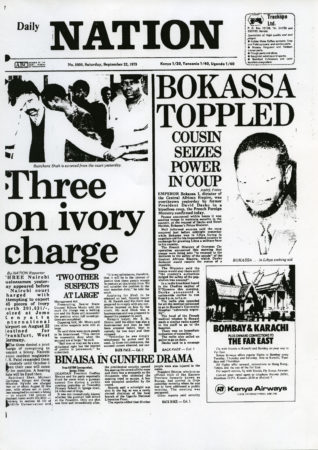 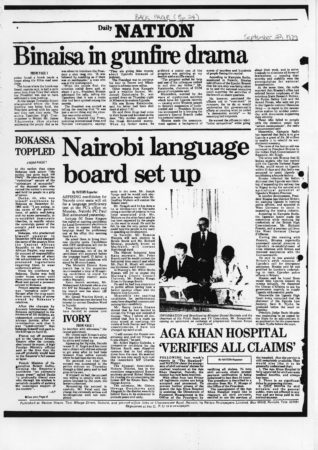 “Ugandan President Godfrey Binaisa and his party reportedly dived for cover when a gunman opened fire during a public meeting yesterday at Township Primary School in Iganga town, 24 miles east of Jinja.

It was not immediately known whether the gunman had aimed at the President. Only one shot was fired and immediately after, the presidential security opened fire scaring the crowd all the mor and there was a stampede as the thousands who attended the meeting tried to escape. A boy was trampled underfoot by the crowd.

Reports said a schoolgirl was shot in the leg; so was a newly elected chairman of the local branch of the Uganda National Liberation Front.”

“At the Iganga Township School playground where the first meeting was being held, the President arrived with his party and they took their seats. The acting Ugandan High Commissioner to Britain Mr. James Zikyusooka, then started addressing the people. But as he was about to introduce the President a shot rang out. “It was followed by rumbling as if there was an earthquake,” a man who was at the meeting said.

When the people fled, the situation cooled down and, at about 1 p.m., President Binaisa addressed the rally, telling the Ugandans that it was a snake that had been spotten among the crowds.”

“Binaisa blasted the Press including international Press and Kenyan newspapers, saying: “They are giving false reports about Uganda because of jealousy.” 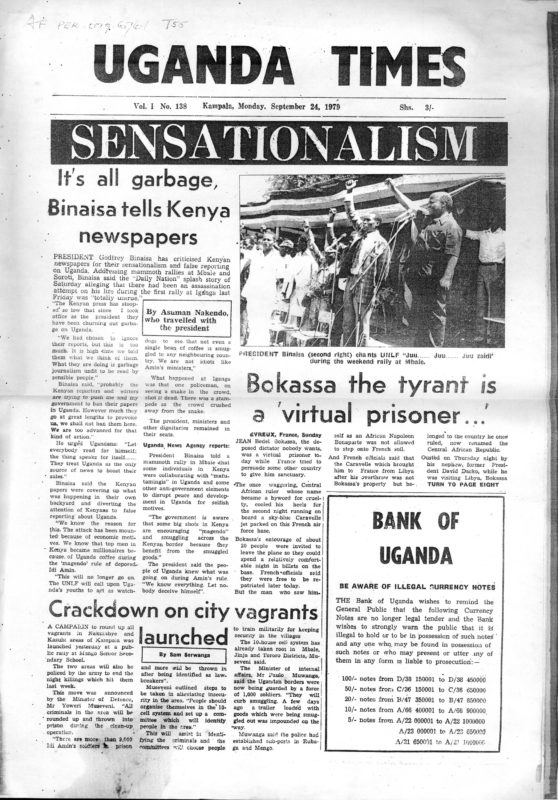 September 24, 1979, By Asuman Nakendo who travelled with the president

President Godfrey Binaisa has criticised Kenyan newspapers for their sensationalism and false reporting on Uganda. Addressing mammoth rallies at Mbale and Soroti, Binaisa said the “Daily Nation” splash story of Saturday alleging that there had been an assassination attempt on his life during the first rally at Iganga last Friday was “totally untrue.”

“Binaisa said, “probably the Kenyan reporters and editors are trying to push me and my government to ban their papers in Uganda. However much they go at great lengths to provoke us, we shall not ban them here. We are too advanced for that kind of action.”

He urged Ugandans: “Let everybody read for himself; the thing speaks for itself….. They treat Uganda as the only source of news to boost their sales.”

“What happened at Iganga was that one policeman, on seeing a snake in the crowd, shot it dead. There was a stampede as the crowd crushed away from the snake.”